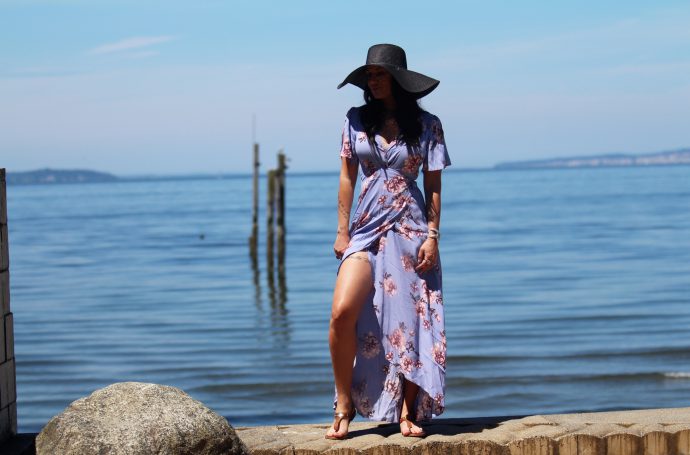 So you guys keep asking me about the wrap dress I posted on my main Instagram page. The problem is that I bought that dress last year and the exact print I’m wearing in the photo is no longer available. The good new is that the designer has multiple other wrap dresses in slightly varying style and print. I can vouch for the brand. Also, my Michael Kor sandals are on sale and that price is a steal. So here is a little wrap dress offering for you. Remember to scroll right to see all of the options. Hope you find something you like! 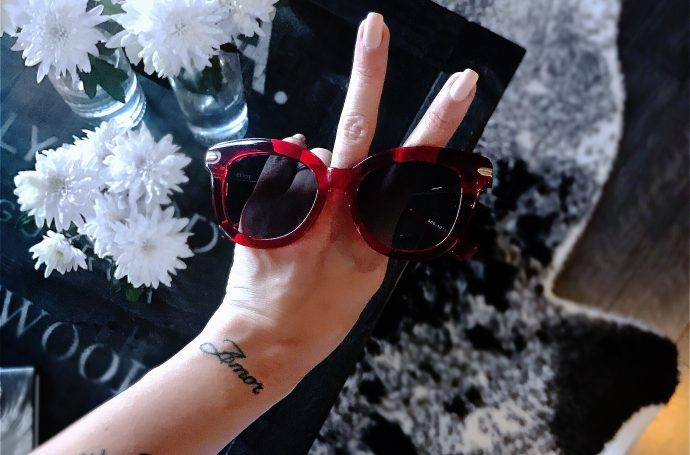 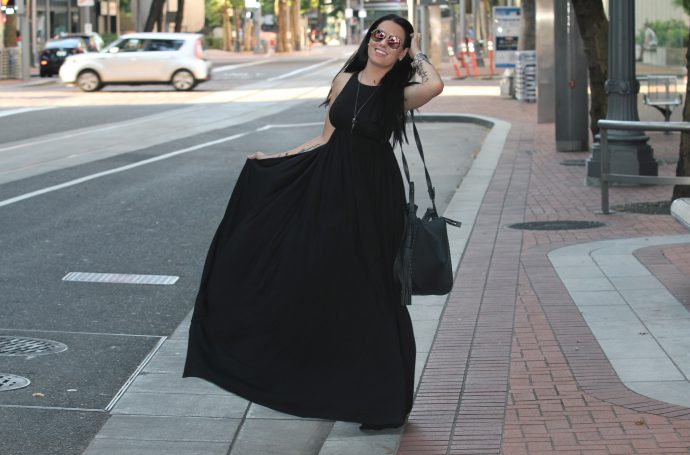 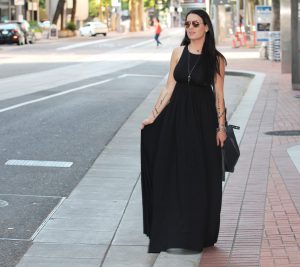 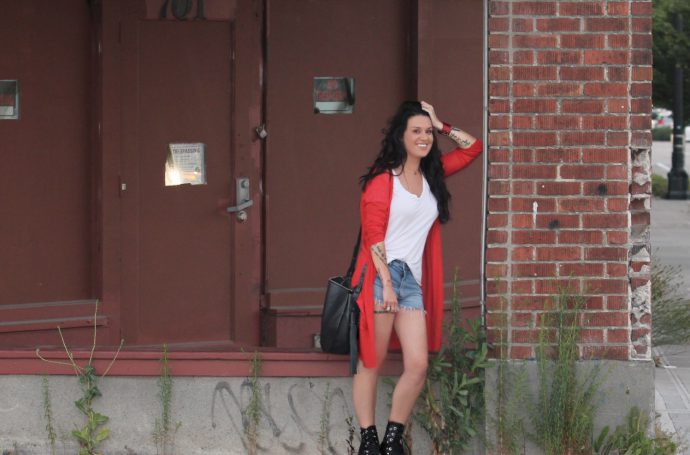 I’m ready. I’ve been working on my thighs and butt with all the squats. I have been casually tanning my white parts. I have established a shaving pattern. Here I am summer! Technically this is the first summer Josh and I will have together. He moved to Washington last March, but my dad had recently died, and my world was shaken with some ugly things. Truth be told, I spent my summer grieving. This summer I plan on sweaty kisses, and swimming, and grilling, and all those other things people do and take photos of. Yay! Also, I finished my book. I can officially relax. Anyway, my sweater is the bomb. So lightweight and perfect for evenings if you live in sweatbox somewhere (Texas and Florida). Here it’s mostly in the seventies during summer. Which is dreamy AF. I threw in some sandals in case you’re not a boots in summer kind of girl. Happy sweating. 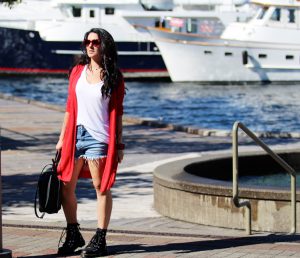 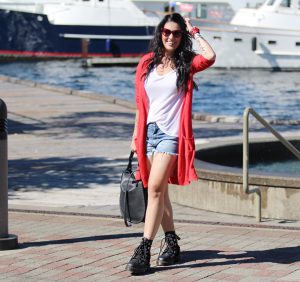 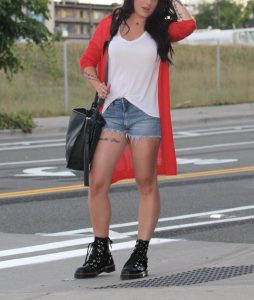 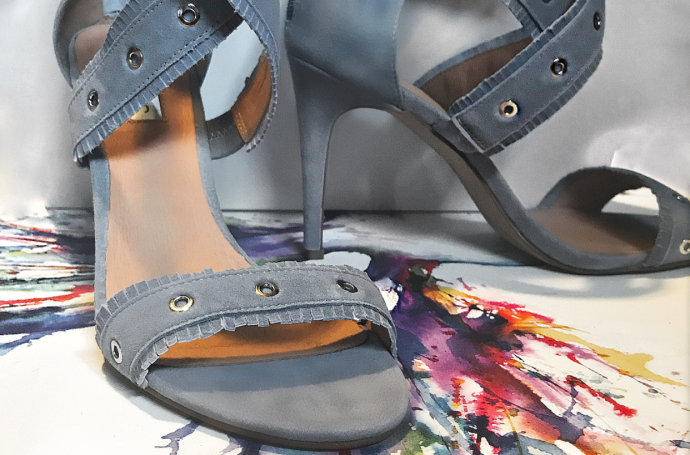 I don’t wear stiletto type heels very often. Seattle has too many hills and I am a notorious tripper. On my first date with Josh I was in Detroit and we were crossing a street to go to a sushi restaurant.  I had heels on and I tripped in the middle of the street. He caught me before I hit the ground (like literally and figuratively), but that was his first experience with Tarry-falls-down. The very next day I wore heels again, and we were walking around downtown when my heel snagged a crack in the sidewalk and down I went again. Only this time I rolled…literally rolled down the street. When he hauled me to my feet I had a new rip in my jeans and a bloody knee. Anyway, why am I telling you all of this while posting a pair of heels that I think you should buy? I don’t know. When you fall off a horse get right back on? Er…they’re pretty? 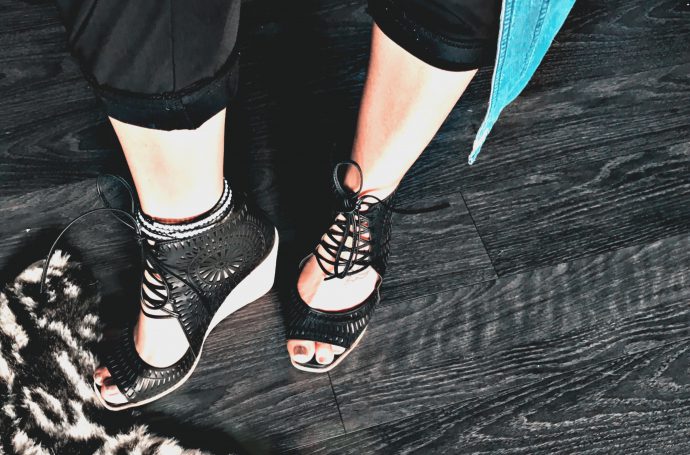 Hi guys, meet my new impulse buy. Wedges that are so comfortable. I’m in love and I don’t regret them for one minute. Kindergarten graduation today. I can’t believe my baby is going to first grade. I remember my last month of pregnancy with him, saying to myself, ‘This is never going to end. You’ll be pregnant forever.”

And here I am with a first grader. 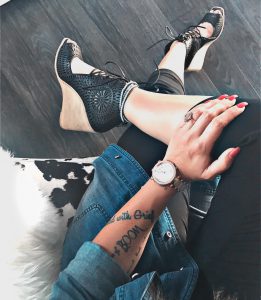 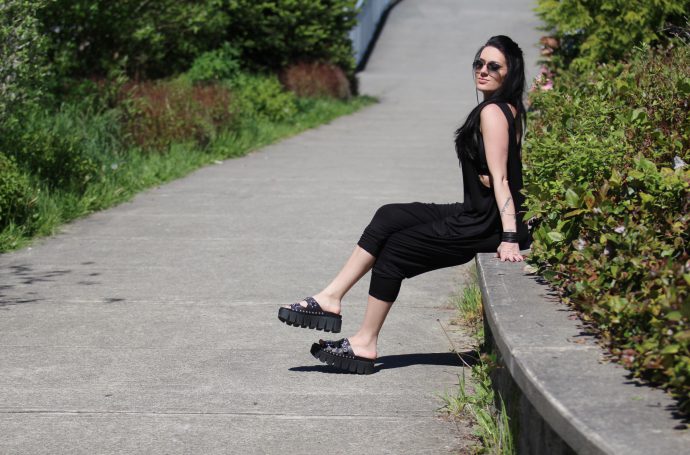 I feel droopy lately. Spirit and body. Writer life doesn’t allow for a lot of soul and body nurturing. My typical day includes getting up to get the kids ready, school drop off, cleaning up the breakfast mess, writing. Then I pick them up from school, do homework, make dinner, play, get them bathed and try to spend some time with Josh. Then it starts all over again the next day. Monotony and exhaustion, right? Let’s not even talk about all the things in the middle like laundry, and school events, and bad behavior from little people. Teaching moments and discipline are time consuming and tiring.  You can relate right?  We get droopy. We run ourselves into the ground just trying to keep up.  Then one day it catches up, doesn’t it? And you feel…hopeless.

I don’t have a solution for these times, but I know you have try. Try to eat healthier, try to slip some exercise in, try to do something for yourself every once in a while, try to slow down and enjoy parenting rather than rushing through it.  I came outside today and I’m just sitting in the sun, taking deep breaths and reading a little. Below is what I’m wearing and reading.

Jumpsuits are great. You can argue that they make you feel larger, lumpy or dumpy, but t-shirts do that too, and I feel like we all spend way too much time in t-shirts. This is a fun and comfortable alternative to your regular casual wear. And have I told you guys about Ringly? It’s like a Fitbit but in ring form. You can keep track of your steps by wearing a Ringly and there’s an app that keeps you updated and motivated. I’m loving mine. Hope you have a really fabulous weekend. 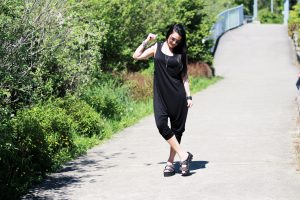 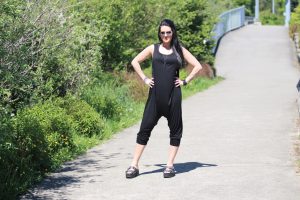 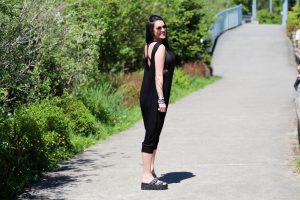 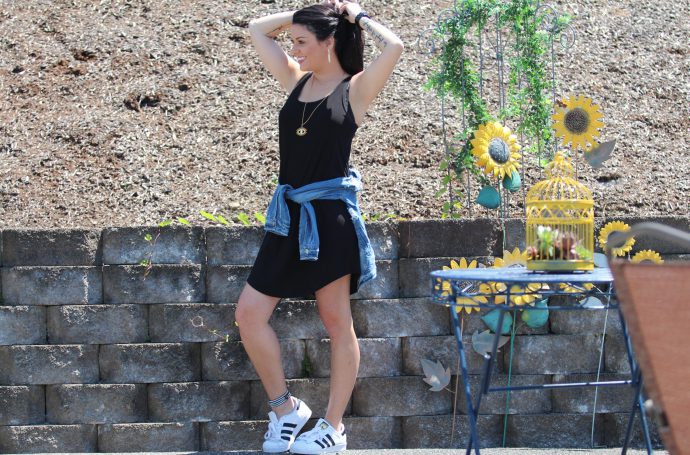 Step right up, shoot an arrow at the target-The Red Jumpsuit Apparatus if you’re not familiar. And you know what? I wasn’t familiar, not until Josh started song flirting with me. It didn’t click right away. Not when my friends told me (you’re dense like a brick, Tarryn), or when the songs intensified in message (Front Porch Step, Whole Again).

He bought me the arrow necklace our first Christmas together annnnd I guess The Red Jumpsuit Apparatus has a special place in my heart. My necklace is an oldie from Tiffany & Company, but I found some similar styles. And hey! Perfectly frayed jean jacket, hello! I have this dress in four colors (green, black, pink, and blue). Not all at once, yo! Every year Leith releases a new color. But black was the first and after four years of washes it still looks brand new.

Scroll to the bottom of my post to see what I’m reading! 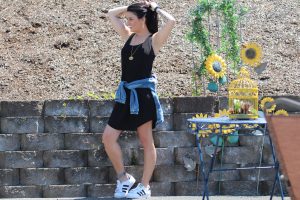 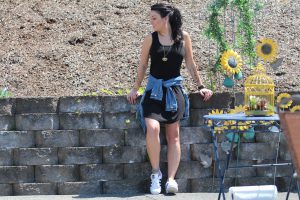 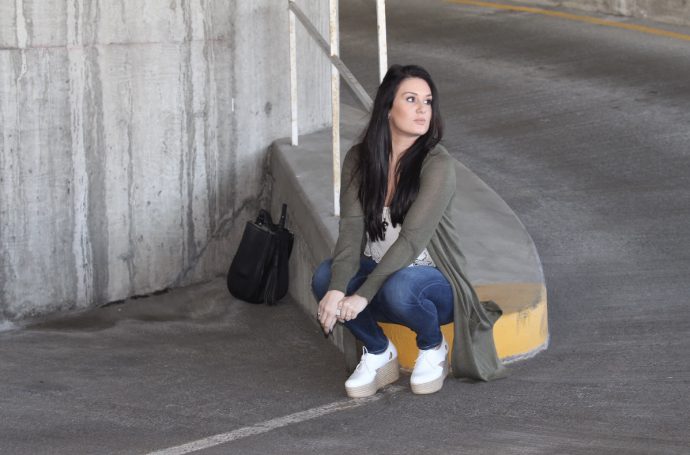 First pair of high-waisted jeans, right here. I’ve never even tried a pair on because they have that mom jean stigma. And while mom jeans look sexy and dare-I-say even cool on twenty year olds, well…I am a mom. And on me they look like mom jeans. I’m adjusting. Because guess what? They’re so comfortable. So, so comfortable. I may never go back. I stepped out of the box and wore my new mom jeans with a crop top. Yikes. There was even a bit of belly peeking through. I’m normally an oversized shirt kind of girl…long…flowy. But, I felt good in this whole outfit and I really believe it was the mom-er- I mean high-waisted jeans that made me feel that way. My espadrille shoes, they’re from last year so I wasn’t able to find them. However I found some similar flatforms I thought you’d like. P.s. “I’m not a regular mom, I’m a cool mom.” 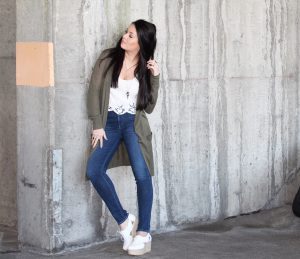 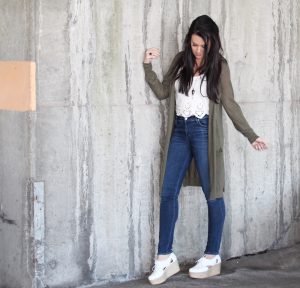 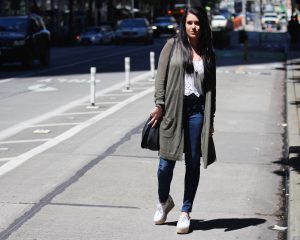 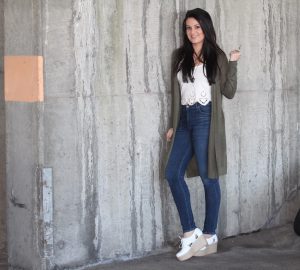 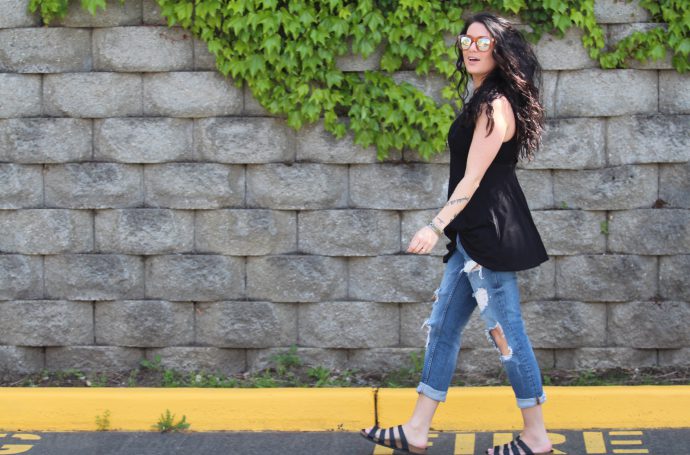 So it was warm this weekend. I was cheerful AF. Josh was very confused. But guess what? It was a nice break and it’s not hot enough to be oppressive yet. Holla to all my Florida and Texas friends! I had dinner at my friend, Simone’s house last night (you may know her as @simoneinthekitchen on Instagram) and now I’m obsessed with miniature cucumbers. Damn, that girl can cook. Anyway, find mini cucumbers and dip them in hummus. Yum.

This post includes plus size. And for those of you who ask about my ripped jeans, well when I buy my ripped jeans they often aren’t shredded enough for me so I actually go in with a razor and rip them further. If you see more intense rips in any of my jean pictures this is why. Birkenstocks, the perfect shoe. They actually mold to the shape of your foot after a few wears and provide back support (this is something I need) They last hellavu long too. It’s difficult to make them look worn. Worth every penny in my opinion. Links below! 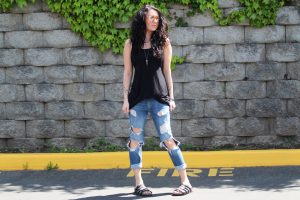 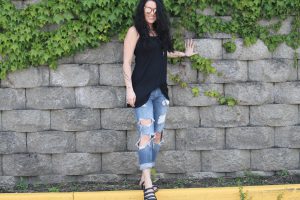